Follow My Soul Therapies on WordPress.com
Join 323 other followers

These are the do’s and don’ts of relationships that we all can learn from Marnie. She is a strong character and you can tell she suppresses a lot. Only if she would stop focusing on everyone else’s problems and fixated on her own.

Never put all your eggs into one basket…

In the first season we see how much she has invested in to her boyfriend. Just to find out that with one small mistake he would throw it away and find someone new just a few short weeks later.

Don’t be the one to do everything in the relationship.

I read a great article that suggested when being in a relationship, its 100/100 not 50/50… most days its 60/40 or even 80/20… but it is where you invest your efforts and when that matter. Space out your good deeds so they are less expected.

Don’t try to fix an issue that is going on by replacing it with a happier issues.

AKA, switching topics. How often does she get mad and start to voice her opinion to just get interrupted with some ones else’s better news. Oh you know like being in a huge fight over money issues and then accept a marriage proposal. Just 2 sentences into her argument about NOT wanting a failing relationship like her parents. Way to go!

Have enough pride in yourself to know who you deserve.

I could not tell you why in the world Marnie would choose to be “the other women” in a relationship. She has soooo much to offer, yet she threw it at a man who was already taken. This makes my heart sad for every girl who gets themselves into this kind of ordeal. If you want to be the only one then make sure there is no other one.

Know what you want before you go out looking.

I use this in my day-to-day, as simple as shopping and as complex as future plan/goal making. You get this sense from Marnie that she is still just floating along with everything, not ever really knowing what she wants. She didn’t want to be smothered by a serious boyfriend then gets with someone who is distant but requires him to show her more attention. Get it together, you are either on the bus or off!

It is ok to have a friends with benefits, as long that is as far as it goes.

One of the most fun times I had in my life was being single but having a friends with benefits to keep me satisfied. It helped to keep my eye on what else is important in life, besides being in relationships all the time. Just do not let the feelings catch up with you in the situation.

Do not sleep with some one out of vengeance.

You see red and you want nothing more than to hurt that ex, but it safer to play it cool and not hurt your own self in the midst of it all. You never know what your random hook up can be into. Like Marnie’s crazy fling with Booth, the artist. It ends with her in a very compromising situation. Just watch season 2.

Sympathy sex should be left to, well no one.

Why would she sleep with her gay friend? To see if she could turn him back? I doubt it. Or the best man from Jessa’s wedding, he is in no way her type. Instead you can really confuse someone or damage feelings. Don’t sleep with someone out of pity. It just is not classy.

If it didn’t work the first time, it more than likely will not work the next round.

Marnie decided to hop on the Charlie train again but was left in the begging of season 3 with no boyfriend, AGAIN. See, there is this thing I belive in where if two people are good at being around each other but can not make it as a couple; well, leave it at friends. Do not try to date again just because you see that special something in them again. They haven’t changed and neither have you. Let it be and find the next greatest thing. 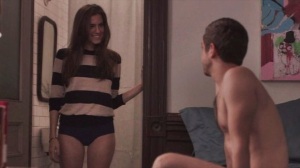 Try not to let love blind you.

It is a true saying that love is blinding but infatuation can be even more so. I feel like now, at the end of season 4, Marnie is going to have a tough decision to make in the nearing future. Between her “friends with benefits” Ray and Desi her newly engaged infatuation. You can see it in Ray’s eyes when he gives his speech how he longs for her again, and it is almost prevalent that Marnie in return desires that respect and caring that he offers. But here she is with bright lights and hottie fiance showing off to the world that she is going to be a big time singer/ musician duo with her man. It is all just blurring the future even more for her.

With any advice given on relationships, always listen to your heart and head first. No one can tell you how to feel or what to do. Only you have that power. Just try to learn from someone elses mistakes so you don’t have to crash and burn just as hard. Take it from Marnie, a life in and out of relationships gets you caught up in some intense things. So hold on and try to enjoy the ride!